This month I’ve veered away from cigarette cards and moved onto postcards, starting with this gorgeous coloured number featuring Richard Barthelmess and Lila Lee. A romantic keepsake, don’t you agree? 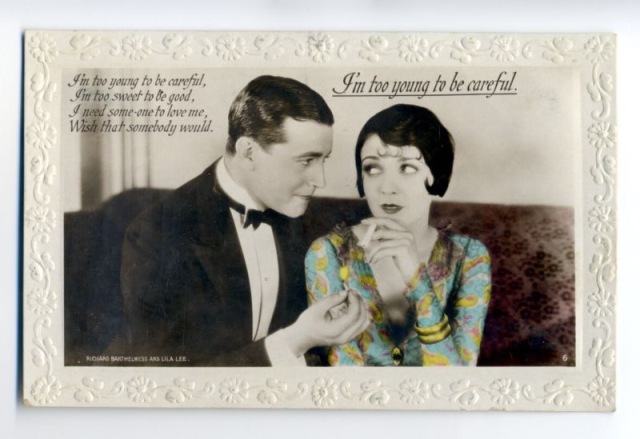 I think this postcard must be from the 1929 early talkie ‘Drag’, also distributed in a silent version.﻿

Richard Barthelmess was a resounding success in motion pictures, both as an actor and producer. As a result, once talking pictures came on the scene he started to lose interest somewhat in the business of movie making and was content to allow his star to fade. However his preservation story is a little different to that of his friends William Powell and Ronald Colman. Dick Barthelmess had been a major star since the late teens, so his back catalogue is far more extensive and therefore as you can see from the list below, far more of his movies have been retained:

So that’s not a bad little number to work my way through. Lillian Gish said that Richard Barthelmess’ “…face was the most beautiful of any man who had ever been before the camera…” and this postcard certainly provides the evidence of that.